Lashof Violins performs Appraisals of instruments for Insurance or Market Value purposes for a flat fee.

With an Insurance Appraisal, previous repairs have less to do with the instrument's replacement value. If a violin has a repaired crack or a non-original scroll and you lose the violin, you are probably not going to go shopping for another violin with the same repaired crack and replaced scroll, therefore, the Insurance Appraisal is the replacement value of the instrument.

In general, the newer the instrument, the better the condition it is in, and the "cleaner" the provenance, the closer the Insurance and Market Value will agree with each other. Appraisals done at Lashof Violins clearly state which version of appraisal you are getting. Our Appraisals are prepared using guidelines from the Appraisers Association of America.

Please note: Due to the numerous factors involved in determining an instrument's value, Lashof Violins only offers appraisals (written and verbal) for instruments physically in the store. Photographs of an instrument or a description of the label do not provide enough information about the instrument for us to accurately determine a value, nor are they enough to say where the instrument was made or who may have made it. If you wish to have an evaluation/appraisal of an instrument, we recommend bringing the instrument into Lashof Violins (or a reputable violin store near you) for identification.

So You Think You've Got A Strad...


Your Grandfather's Strad. Unfortunately, the odds that the violin tucked away in your grandfather's attic is an authentic, genuine Stradivarius are very low. But don't turn Granddad's fiddle into a planter just yet, there may still be some value to this hidden heirloom! 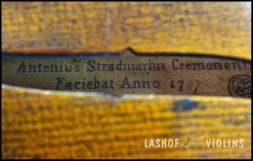 A Little Bit About Instrument Labels. An instrument label can be a wonderful way to verify an instrument's maker, but it is not the first thing an appraiser evaluates when determining an instrument's origin. Unfortunately, some unscrupulous makers have copied and inserted actual reproductions of labels into instruments as a way to sell the instrument as something it is not. This does not mean all labels are fictitious, but it does mean an appraiser is going to look at the instrument's other attributes before considering what the label has to say.

Why Does the Label Say " Antonius Stradivarius" if the Instrument is not a Strad?

The Cremonese masters who created the modern violin design are the most imitated makers because of their innovation and skill. During the 19th century in particular, hundreds of thousands of instruments were made in the design of these great makers (the Amatis, Stradivarius, Guarnerius, Maggini, etc.). The 19th century makers would insert labels into the instruments as a way to distinguish the different models of instruments they were distributing (see the image above for a common "Strad" model label). The customers who purchased the instruments during the 19th century were aware the instrument they were purchasing was not an original, but was modeled after a great maker and was, therefore, labeled with his name.

Today, as more people are beginning to unearth instruments which have been passed down through generations, the original understanding of the instrument's origin is often lost and many people, after reading the inside label, are misled into thinking they have an authentic Amati or Strad. Many of these "Strad" or "Guarneri" instruments which remain from the 19th century vary in price, so it still may be worthwhile to have your instrument evaluated by an appraiser if you would like to know more about its value or maker.

A Little More About Labels.

In 1891, the McKinley Tariff Act was passed which changed how items imported into the United States were labeled/marked. From 1891-1913, imported instruments now had to be marked with their country of origin. From 1914-1920, imported items were required to be marked/labeled with the words "Made in." After another revision in 1921, the act was revised to require the country of origin name be written in English. So, assuming the label is authentic, a violin labeled "Bavaria" would most likely have been made between 1891 and 1913. "Made in Italia" might be before 1921.

A violin labeled "Made in Japan" was probably made after 1921. Prior to 1921, instruments most likely have been labeled, "Nippon" or "Made in Nippon." After WWII, during the US occupation of Japan, items made for export were marked "Made in Occupied Japan" or perhaps "Occupied Japan."

Violins labeled "Made in Germany" are most likely made between 1921 and WWII (the late 1940's). After the split of Germany until its reunification in the 1990's, labels were marked "Made in West Germany" or "Made in East Germany."

So, if your attic violin is labeled an "Antonius Stradivarius 1707," but it also says "Made in Germany," the violin is, sadly, not an authentic Stradivari, but probably a factory-made copy. In this instance, you don't need an appraiser to tell you your instrument is not authentic, but you still may wish to seek out a professional opinion to find out the actual value of the instrument.


Lashof Violins occasionally accepts instruments for sale on a consignment basis. This means, at our discretion, we will accept instruments for sale which have been sold either by our store or by another dealer. For this service, on instruments we have previously sold, we will charge a commission fee for the sale and deduct from the original sale price any devaluation due to market changes, physical condition, and repairs that are needed. (Other conditions may apply for instruments originally sold through another store.)

It is impossible to predict how quickly an instrument will sell--as with any instrument sale, we are at the mercy of the customer who comes in through the door. We equally show stock and consignment instruments based on the request of the customer. Some instruments sell in a matter of days and others might take several years to find the right home.

When a consignment instrument is accepted for sale, we will determine its value, decide on a fair selling price, deduct the commission and the repair costs, and the remaining balance will be the net amount the consignee/seller will receive when the instrument has sold (sale price minus commission fee & cost of repairs= consignee net). A consignment contract will be issued when the instrument is dropped off for sale.

We can modify our policy: We reserve the right to cancel or modify this policy at any time. All prior contracts will remain valid as written.

We do not accept instruments by mail for consignment. All consignees must come in person to our store for evaluation of potential consignments and, if the instrument is accepted, to sign the consignment agreement in person.

Not Part of the Purchase Agreement

By accepting an instrument for sale on a consignment basis, Lashof Violins does not offer to purchase the consigned items when they are dropped off or in the future. We can exercise our right to exclude any instrument from this program at any time. All aspects regarding consignment sales are entirely at our discretion.