News from the Bench / Should I Scratch My New Rosin?

To Scuff or Not to Scuff

Should You Scratch Your New Rosin? 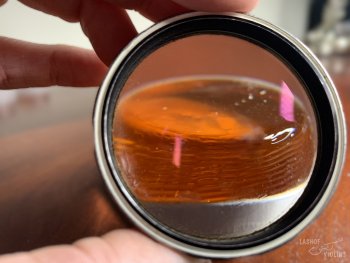 For decades upon decades, we have seen, cleaned, vacuumed, swept, and scrubbed broken rosin off of:
Bows
and Cases
and Floors
and Aprons
and Counters
and Shop Dogs
and Instruments
and Our Own Hands
and...Well, you get the picture. 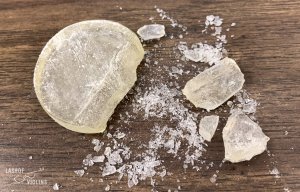 There's, like, a whole lot of broken rosin that comes through a violin shop.

Many of the rosins we see are broken after accidental bumps off a music stand or drops on the floor.

However, we also see an abundance of chipped and cracked rosin.

Conversations with customers who bring in chipped/cracked rosin usually reveal that the rosin in question was aggressively carved with a kitchen knife, paperclip, house key, or a bow screw.

This idea about "roughing up" new rosin stems from (what we believe to be) fiddle folklore. The truth of the matter is-- brand new rosin doesn't need to be carved, scratched, or scuffed with an abrasive item!
New, Used, Sanded, and Misused

We decided to do a couple of photo experiments to demonstrate how different rosin starting techniques actually affect the rosin.

Pictured above are four cakes of rosin. They are all the same brand and model in four different conditions.
All four rosins began in the same, new condition before our experiment. 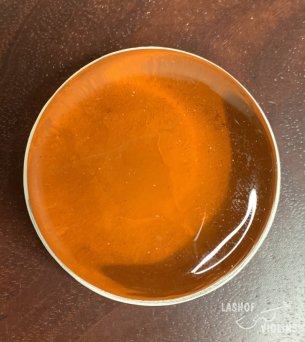 This is a brand-new cake of rosin.


It has just been removed from the packaging.


The surface of the new rosin is unmarred--it is smooth and shiny.


Many people see a new rosin like this and think there is no way that a powdered form of rosin can possibly be pulled from this pristine prism of potential stickiness. 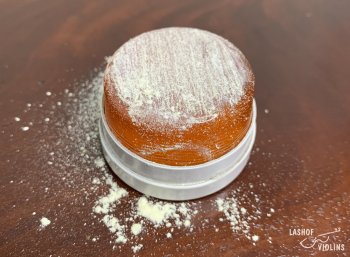 This is a rosin cake that has been scuffed and scratched with sandpaper.

As you can see, the surface of this rosin has changed quite a bit. When applied to a bow, the sound with this rosin was okay, but a little grainy.

As can easily be seen, there is rosin everywhere.
The table was sticky. Our fingers were sticky.
The camera was, unfortunately, sticky, too.

(This was a messy process.) 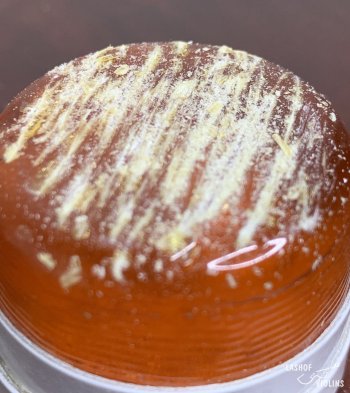 This is a rosin that has been scraped rather unceremoniously with the (button) end of a bow screw.

You can see small divets and grooves in the surface of the rosin.

You can also see small flakes and chunks of rosin just sitting on top of the surface.

We tried to avoid getting to the edges of the rosin cake while trying this technique so that larger bits of rosin didn't fracture and break off of the top or edges.
It wasn't easy to avoid and, as a result, pieces of rosin came off the edge.

When applied to a bow, this rosin sounded grittier and less focused than the other rosins we included in our experiment. Additionally, the bow hair caught on the broken edge and did not glide easily along the surface of this rosin.

This technique is also rather sticky with the added bonus of small hunks of rosin flying all over the table and floor during the "prep" process. 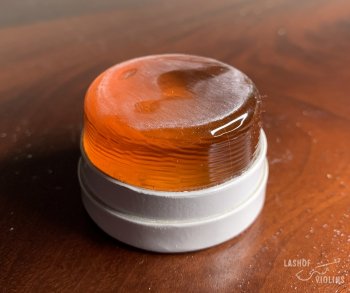 This rosin has been used normally on a violin bow. Nothing was done to this rosin
before it was used on the bow. We did ten passes of the rosin (up and down) along the hair of the bow.

The surface of the rosin is scuffed from the normal application alone and the bow was ready for playing. The hair was uniformly covered with now-powdered rosin.
This rosin produced a warm, but clear sound and was easily controlled on the strings.

With a few more regular applications on a bow, the surface of the rosin will be
leveled and the remaining shiny spots will be scuffed, too.

Additionally, there was no cloud or cascade of falling/flying rosin with this technique.
The hair moved smoothly across the rosin because there were no grooves,
cracks, or fractures created by sandpaper or a bow screw.

Up Close
This second series of photos presents a magnified view of the four rosins pictured above. 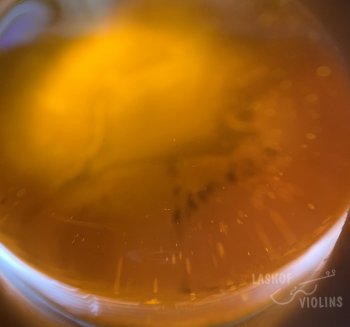 This is the unused rosin.


Even at this magnified level, the surface of the rosin pictured is smooth. 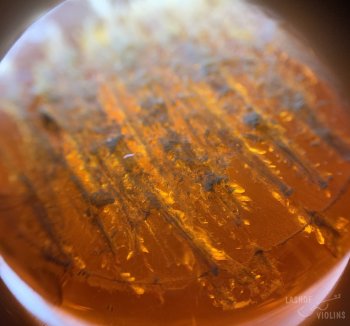 The is the rosin that was etched with a bow screw. (Poor bow screw!)

There are distinct lines carved into the surface of the rosin.

More importantly, you can see exactly how many fractures and cracks
were created along the surface of the rosin.

This rosin's surface is more likely to catch and snag individual hairs when drawn
across the ribbon of hair on a bow.

The loose rosin bits and excess dust fall to the ground when trying to apply normally to a bow.
These loose bits also add unneeded texture to the surface of the bow hair and make the sound gritty and gravelly. 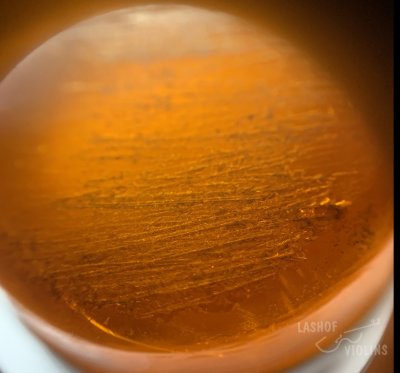 This is the rosin that was scratched with sandpaper.

The surface of this rosin is also visibly scuffed.

However, just like the rosin which was etched by a bow screw, the surface of this rosin also has tiny fractures. 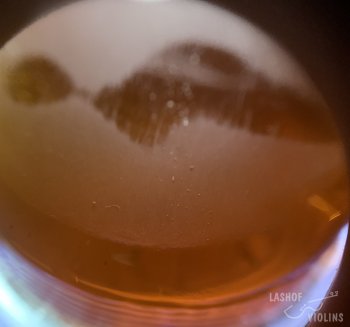 Finally, this is the rosin which was used normally on a bow.

Because of its uniformly "buffed" surface, this rosin was a lot harder to photograph up close!

The bowed surface is smooth and doesn't have visibly deep grooves, cracks, or fractures in the surface of the rosin.

Horsehair (or reputable synthetic bow hair options) is naturally coarse enough to pull rosin off the cake without any additional abrasive techniques.

Try it on Your Own! 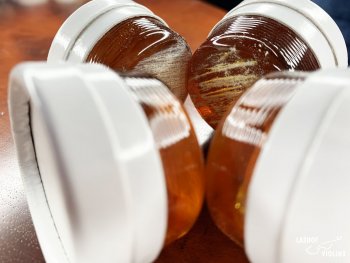 Don't believe the photo evidence? Try it for yourself!

Next time you get a new cake of rosin, try applying it directly to your bow without harming the rosin.

If you still find that you're not getting an even application of rosin on your bow, it may be time to ask the following question:

Has Your Bow Already Been Rosined?
Finesse is Best 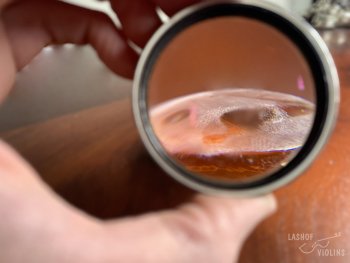 The moral of our story: new rosin requires no extra work to use! Many players are putting too much work into starting a new rosin based on what is fiddle folklore.

Rosin cakes are fragile and carving, scratching, or etching the surface of a rosin will make affect its durability and shorten its lifespan. Additionally, smooth rosin application sounds better and is best achieved with a rosin that has a smooth surface.

So remember: be kind to your bow screw, stop making your house key so sticky, leave the sandpaper for other projects, save the paper clips for paper, and step away from the kitchen knives! Your bow will thank you!In the market for a new rosin?
Click here to check out our online shop or stop by our store for even more rosin selection!