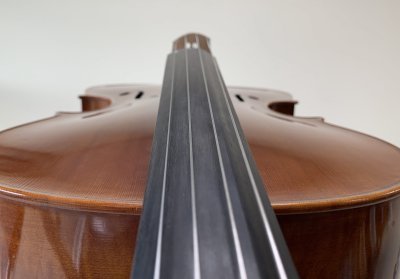 Strings today are manufactured to such high-quality standards that it very uncommon for a string to break with normal use/tuning. The following is a list of common locations where strings break and the probable cause. When in doubt, keep your broken string and take the string and your instrument to your local repairman for investigation. 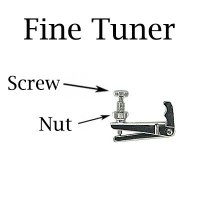 The string was installed incorrectly and the tuner sides are pinching the sides of the string causing it to break or there is a metal burr on the fine tuner prong. Loop thick, soft-centered, synthetic core strings around fine tuners (like the one pictured above) to avoid the string becoming pinched inside of the tuner prong.

2. Breaks at the tailpiece slot:

The string was installed into a tailpiece whose slots are too tight for the string and are pinching the sides of the string causing the string to break. Have a repairman adjust the width of the slot for proper clearance.

3. Breaks or unravels at the bridge:

The bridge slot is either too deep or too rough and the string is being pinched. Have a repairman adjust or replace the bridge. Bridges made out of lower quality woods may be soft and the strings may work their way into the groove quickly and cause problems for all four strings.

4. Breaks or frays in the playing area: the string can wear from considerable use-- some players change their strings as often as every 6 to 8 weeks due to the amount of playing/practicing time. The more you play, small amounts of the metal are worn away and the string gets thinner and can start to fray or break. An uneven fingerboard can also cause this wear, if this is the case have a repairman check and resurface the fingerboard. Sharp fingernails or acidic skin can also damage the metal jacket of the string. 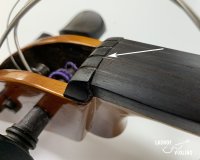 Like the bridge, a rough or too deep notch in the nut can cause fraying or breakage of the string. Have a repairmen repair or replace the nut. Excessive tuning from out-of-round or poorly fit pegs (they slip often) can also cause breakage.

7. Breaks where the string meets the peg: especially on the E and G strings, the string can get caught between the edge of the pegbox wall and the hole for the peg. Be sure to properly wrap a string onto the peg so that the last winding does not forcibly press against the pegbox wall.

8. Breaks in the windings on the peg: if the string hits the bottom of the pegbox, it can be worn through. Be sure to properly wind the string without numerous layers over top of one another. If the string still hits then the instrument should be taken to the repairman for more space to be added under the peg for proper clearance. Occasionally strings may hit other pegs--this often true in older instruments that have replacement pegs with larger shafts or an instrument whose pegs holes were drilled in the incorrect positions. If this is the case, your peg box may need bushings to realign the pegs to prevent string contact.